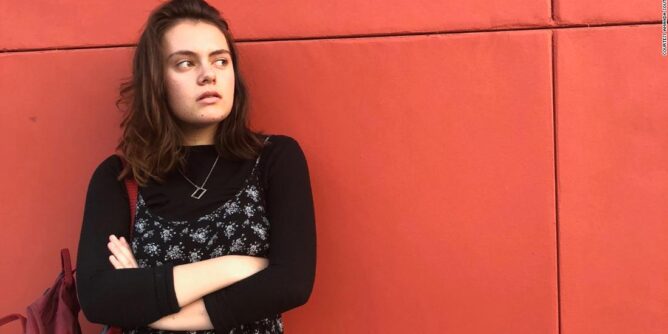 It was his first time leading a focus group session, and 17-year-old Alvaro Piedra was nervous.

“Thanks for coming today,” he read from a prepared script, greeting his schoolmates gathered in a business classroom at Rangeview High School in Aurora. “We’re here to talk about the suicide problem, and we want to talk about stress. What causes you stress?”

Classmate Anquanette Murray-Cawthorn immediately ticked off a list of stressors in her life: “School. Family. Money. Getting into college.”

Others sitting around the table agreed. They also agreed that Rangeview’s well-organized system of student-run clubs largely helped them work through the stress. The whole focus group session took less than 10 minutes, and left Piedra feeling uncertain about what he’d learned.

“I think we need some more in-depth questions,” he concluded. “We need specific questions related to specific groups of people, not just questions you could ask anyone.”

Thus are entrepreneurs made: learning how to target an audience, identify that audience’s greatest perceived needs, then respond with a product to meet those needs. That’s exactly what Piedra and his classmates in Rangeview’s Entrepreneurship and Management class are learning to do.

But this is entrepreneurship with a twist. The students at Rangeview and nine other schools across the metro area are taking part in a special program that teaches them to use market-based business principles to achieve social change – in this case, becoming mental health advocates as a means to prevent teen suicide.

Now in its third year, the FIRE Within program, created by the Carson J. Spencer Foundation, blends training in mental health services for at-risk teens, provided by the Second Wind Fund, with Junior Achievement’s entrepreneurial curriculum.

“Through innovation and entrepreneurism, we inspire young people to find market-based solutions to mental health issues,” said Jess Stohlmann, program manager at the Carson J. Spencer Foundation and one of the mentors to the Rangeview students.

The challenge to students: Come up with a product that is socially responsible, profitable and environmentally conscious. Then create and implement a business plan to market that product.

Last year, 30 Rangeview students in business teacher Kim Reiser’s entrepreneurship class took up the challenge. They began by conducting a needs assessment of the student body, and concluded that bullying was a huge indicator that a teen might be contemplating suicide. They began to look for ways they could reduce bullying, thus potentially lowering the number of suicides.

“We concentrated on cyber bullying,” said Reiser. Her students all became “i-Mentors” through i-SAFE, a publisher of online safety education materials. They created a stylish wristband carrying the message “I Choose to Live, I Choose to Love,” with the i in live and the o in love atop one another to resemble the Greek letter phi. Inside the wristband they included a suicide prevention hotline number.

“We attached awareness cards to those bracelets with statistics about teen suicide, phone numbers and why we were doing this,” said Reiser. Students also created a series of cyber-bullying safety lessons, which they presented to the entire student body once a month.

Cost to produce each bracelet was 18 cents. They sold for $3 apiece. The first order of 250 bracelets sold out in two days.

“Over the course of time, we sold 3,000 bracelets,” Reiser said. With the profits, the youngsters were able to stage a benefit concert to promote suicide prevention and to make a donation to the Second Wind Fund, the Lakewood-based organization dedicated to battling teen suicide.

Organizers believe the bracelets and related anti-bullying marketing campaign did, in fact, have an impact. A follow-up survey showed 91 percent of students at the school were aware of the campaign, and 74 percent said they felt more confident in their ability to stand up to a bully.

“The face of bullying at that school has really changed,” Stohlmann said. “You see a transformation and a real change in culture when students work on solving the root cause of a problem.”

The Rangeview project was so successful, it won a $500 Innovation Challenge award from Metro State last year. But other schools participating in the FIRE Within program also came up with successful products.

Students at CEC Middle College in Denver designed a cartoon character they call YABY, or Youth Against Bullying Youth, which will decorate hats, wristbands, water bottles and other items. Teens who complete an anti-bullying curriculum become eligible to purchase the YABY merchandise.

“Kids know they can talk to people who wear stuff with the YABY logo on it,” Stohlmann said.

This year, the program has expanded to 10 campuses, and the students at Rangeview are hoping to repeat the success last year’s class had.

“It’s a whole new group of students, and they’ll need to conduct a fresh needs assessment,” Reiser said. “They may find the root cause of suicide is something other than bullying.”

This fall, students have been conducting surveys, interviewing stakeholders and digging into various indexes such as test scores and dropout rates that could shed light on what issues are especially critical at Rangeview. They’ve just begun a series of planned focus groups. Reiser isn’t sure where the class’s research will lead, but students are already looking at baseball caps as a possible product they can sell.

“My group thought of snap-back caps,” said Patrick Spillman, a member of Reiser’s class. “Someone else suggested dog tags. Someone suggested apps for smart phones. Someone else thought of sunglasses. One way or another, I think we’ll wind up doing something in the fashion sense.”

Phoenix Jackson, who does suicide prevention training at Gateway High School in Aurora, is mentoring marketing students at Lakewood High School in the FIRE Within program. Throughout the fall, they’ve been working on a business plan. After winter break, they’ll attempt to implement it.

“The goal is to equip these children with social entrepreneur skills as well as suicide prevention skills,” said Jackson, a 25-year-old Denver entrepreneur and former Daniels scholar at the University of Denver.

While they’re still undecided on just what product to market, they’re looking at creating an online reality show dealing either with the emotional struggles that can lead a teen to attempt suicide or with the bereavement of a family that has lost someone to suicide.

“This is their top idea right now, but it’s not really a money-making idea,” Jackson said. “But they have a few others they’re also thinking about.”

The FIRE Within program – the initials stand for Future Innovative Resilient Entrepreneurs – emerged from the work of the Carson J. Spencer Foundation, an organization established in 2005 in memory of Carson J. Spencer, who took his own life in 2004 after struggling with bipolar disorder. His sister, Sally Spencer-Thomas, is the executive director.

Spencer-Thomas formerly taught leadership to college students at Regis University, and she already had a strong connection to Junior Achievement. She wondered if there weren’t a way to put those connections to use.

“We were a small, tiny, volunteer-run organization, and JA is huge,” she said. “We offered to partner with them, and they said sure, let’s give it a go. It was a huge coup for us, because we never would have had access to classrooms the way JA does. But JA has the trust of business teachers in Colorado.”

In its first year, the program, piloted at Green Mountain High School in Jefferson County, was a flop, Spencer-Thomas admits.

Last year, the program scaled up to include Rangeview and CEC Middle College. This year, it’s in 10 schools across the metro area.

Now, thanks to a $500,000 grant received this summer from the Adolph Coors Foundation, Spencer-Thomas sees the program expanding exponentially.

“We’re in 10 schools this year, and we’ll be in 20 schools next year, and 60 the year after that,” she said. “If we can scale up to 60 schools statewide, then we’re in a position to go even farther and we’ll look at regional or national expansion.”

The article was published at Young entrepreneurs battle teen suicide