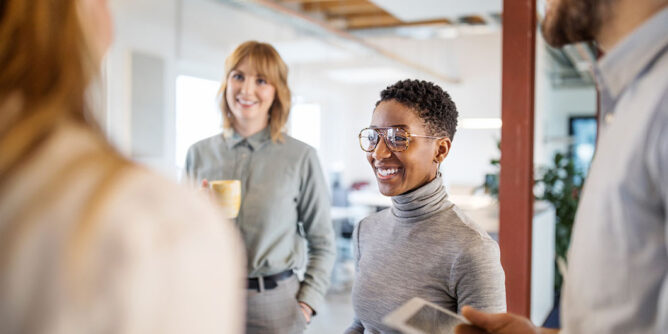 “MOST PEOPLE ASSUME banking services are gender neutral, and they’re just not.” That’s how Mayra Buvinic, Senior Fellow at the Center for Global Development, explains the results of a new study that looks at financial inclusion for women entrepreneurs in the developing world.

The study is the result of a two-year project examining how women microentrepreneurs were able to improve cash flow and grow their business when they were given access to mobile savings tools and business training.

Analyzing 13 separate studies from different countries worldwide, the authors found that interest in savings accounts was much higher among women than men: 63 percent of women would want to open a basic savings account, compared with only 26 percent of men.

Working with a group of 4,000 microentrepreneurs in Tanzania, researchers also measured the success of mobile banking technology and business skills training in improving savings, business practices and economic empowerment. “What we found was that women have a significantly higher propensity to save than men and when they are given the tools to do so, they use them,” Buvinic says.

The women in the study were divided into three groups – the first had no account access and no training; the second were given access to mobile savings accounts; while the third were given accounts as well as business training.

The study found that women’s savings behavior holds whether or not they have access to formal bank accounts and other financial tools, but the methods of savings are far less secure.

Women without access to financial services – the first group – will typically save for specific goals using what they have. That might mean a system where coins are kept in jars with the aim of eventually getting a car or having an emergency fund. Rose Kibona, a 59-year-old Tanzanian woman profiled in the report had a jar, a bag and a locked box, each earmarked for different purposes.

For the women in the second group who were given access to M-Pawa, a savings account made available through mobile phones, savings rates increased threefold.

“M-Pawa and other mobile savings accounts have a very interesting and special impact for women,” Buvinic explains.

“They add a layer of privacy. We started to look at this because we found that if you give a man and a woman the same amount in a business grant, the man’s business will grow more than the woman’s. Why is this? Because when women have cash they are often under pressure from relatives to share it. We call it a ‘kin tax.’ With a mobile account, no one has to know what a woman has saved.”

Mobile accounts can also bridge distance gaps if women live in rural areas or have limited access to transportation for traveling to a physical bank branch. Data from Kenya cited in the report also showed that women prefer mobile bank accounts over using an ATM card because men could make use of the card.

The efficacy of mobile accounts shows the importance of access and product design in financial services. Women are going to save either way, but when given access to a very basic product that solves for issues like travel, privacy and ease of use, the uptake is significant.

For the group of study participants who were given access to both a mobile savings account and business training, the results were even more positive. Business training significantly increased use of record keeping by 32 percent and financial planning by 25 percent. These women were also more likely to start a second business.

“Business training has been a very controversial issue because the quality of training programs varies widely,” Buvinic says. “But what we found here was that when programs are done well they have a significant impact.”

Findings in the study show that when women are given knowledge about financial services or learn a new skill it almost immediately leads to an increase in business productivity. Women who were given access to financial knowledge were less like to be risk averse, and more likely to take studied but profitable risks for their businesses.

Overall, the study found that with or without financial service providers, women are saving and running businesses. But when they are brought into the formal financial system through products that are designed to meet their needs, they save more than men, expand their businesses and are generally stable customers.

Maura Hart, manager for knowledge and communication at Women’s World Banking, which partners with banks worldwide on developing financial services for women, says that while mobile devices can solve for many issues facing women as they try to access financial services, it’s important that the design of these applications doesn’t include too many steps and that providers also offer resources about financial literacy.

“Design is an absolutely critical issue,” she says. “Financial service providers have to think critically about how these services are used. You can’t just put something out there and say ‘We have a mobile app’ without thinking about the ability of the user.

“Banks are starting to come around to tracking usage to get those insights, but it’s still in early stages.”

Yasmin Klaudia Bin Humam, a financial sector development specialist focused on women’s financial inclusion at the World Bank agrees. She says it’s myopic to simply focus on tools. The key, she says, is to look at the universe of factors that keep women outside of the financial system.

“Mobile financial services have potential in many markets, but it doesn’t work everywhere – yet. I think the only way mobile is going to be a game changer for women is when we start looking at the social norms around digital and financial inclusion,” she says.

Women’s World Banking has recently partnered with the Center for Global Development and ExxonMobil on a project called “She Counts” to put these new financial tools in the hands of women all over the world.

Members of She Counts will be required to provide gender disaggregated data to help researchers understand how women are responding to products and services.

“Gender disaggregated data is really important,” Hart says. “We have been working with our partners at Women’s World Banking on tracking gender data and we hope She Counts will further that effort. It’s impossible for financial services providers to claim that they are reaching women unless they start tracking it. How else do they know?”

This article was originally published on Women Want to Save, and Saving Means Success for Microentrepreneurs