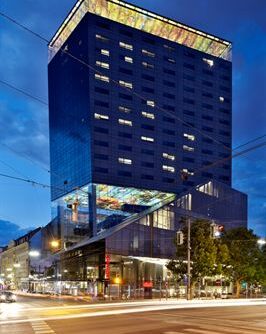 Venture Capital (VC) is often viewed by the mainstream media as an exciting and glamorous part of the entrepreneurial landscape. The popular image portrayed is that of “Dragon’s Den” where hopeful would-be entrepreneurs pitch their ideas to a panel of wealthy investors in a reality TV show. Within the university sector the teaching of entrepreneurship is often focused on getting students to develop business plans and pitch to prospective venture financiers using the Dragon’s Den as a role model.

There is no doubt that VC funding has an important place in the wider landscape of business financing. It is also a good idea for would-be entrepreneurs to learn how to prepare and present business plans. However, the reality is that VC funds only a tiny percentage of businesses. In fact research by the Kauffman Foundation suggests that less than 1% of the estimated 600,000 new employer businesses created in the United States each year obtain VC financing.

Most new start-up ventures are funded by the founder’s savings, credit cards and what they can borrow from the “Three F’s”. These are the family, friends and fools who usually invest in early stage ventures more out of a desire to support the entrepreneur than any rational investment decision. Banks also provide a good deal of money to new ventures, but typically as a second mortgage secured against the entrepreneur’s home or personal assets. VC funding is rare and securing it is nothing like a reality TV show.

What is the venture capital industry?

The VC industry (if we can even use this term) is relatively young. Equity financing of fast growing ventures has been around for a long time. There have been merchant banks since the middle ages and investment banking has been around since the 1930s. Private investment in the form of “business angels” have also been a feature of the entrepreneurial landscape since the 1920s. It emerged when Broadway musicals were funded by wealthy uptown patrons of the theatre who would come downtown like angels to provide the cash needed by producers to bankroll new shows. However, the VC industry as it is known today emerged in the 1990s.

The VC industry is difficult to define. It typically involves formal and informal levels of investment by different institutions across the emerging life-cycle of the business. As shown in the following diagram, the venture capital cycle moves through a series of stages. It commences with informal investing by family, friends and sometimes business angels. If the business needs more money it will proceed through a series of stages until it might go to the open market via an initial public offering (IPO).

This is broadly the funding cycle followed recently by Facebook. It is understood that a major motivator for the Facebook listing was the desire by VC investors to get their money back out. In 2011 Facebook had a valuation of over US$100 billion although its revenue for 2010 was only $2 billion. The list of shareholders who took the company to market is a who’s who of American angel investors and corporate VC funds. A key part of the VC strategy is to exit the deal, so these investors were keen to see the IPO as a means of opening the escape hatch.

The boom and bust of the VC industry

Much of the current hype about VC investing emerged in the United States during the 1990s. The technological changes, particularly in the field of information and communications technologies (ICT) that emerged from the 1970s and 1980s provided opportunities for new enterprises. Companies like Apple, Google, Microsoft, Starbucks, Cisco and Genentech were all recipients of VC funding during their growth cycles.

ICT investments and some opportunities in biotechnology and medical or health science were key fields for VC investment. According to the US National Venture Capital Association (the VC industry lobby group) from 1970 to 2005 VC funding created around 10 million new jobs and US$2.1 trillion in revenues within the United States. By 2007 VC investment in the USA was estimated at around US$29.4 billion across some 3,813 deals. Approximately half of this money was invested evenly across biotechnology, medical technology and ICT areas. The “Dot.com” boom of 1999-2000 was a peak in the VC investment process and something of a high water mark for the sector.

Despite the initially impressive growth of the VC industry during the 1990s, the performance of VC investments over the past decade has been unimpressive. Research undertaken by the Kauffmann Foundation suggests that only 20 out of 100 venture funds produced returns that were better than the public share market by more than 3% per annum. Of these the majority were invested prior to 1995.

Of the majority of US VC funds, 62% failed to exceed returns otherwise available from the public stock markets, particularly after management fees and associated costs were factored in. There is also no consistent evidence of a “J” curve emerging in VC investments since at least 1997 and only 13% of VC funds with over US$400 million of capital invested produced better returns than could be obtained on the stock market. Overall, the majority (78%) of VC funds examined failed to deliver sufficient returns to reward patient long-term investors.

Kauffman Foundation’s research also tracked the performance of VC investments over time from the early 1990s to 2008 at the start of the global financial crisis. According to this analysis the VC industry in the United States was the architect of its own destruction. Investments in many traditional VC areas were becoming less capital intensive, while exit strategies via IPO or trade sales were more problematic. As such markets were less willing to take on immature and unprofitable companies. As shown in the following diagram, the level of committed capital rose dramatically in the late 1990s only to reach a point of saturation resulting in a rapid decline in VC performance.

According to the Kauffman Foundation the best option for addressing this problem is to “right-size” the VC industry, reducing the size of the venture funding going into the US economy. Its size within the overall context of the US economy grew abnormally during the 1990s and early 2000s, but has now become a largely unattractive asset class.

So how is the VC industry in Australia doing?

For Australia the plunge into VC investment paralleled that of the USA albeit on a much smaller scale. In 2007 there were 186 VC funds managers and 280 investment funds operating in Australia with around $15.2 billion. A study by the Australian Bureau of Statistics (ABS) into the Australian VC industry in 2008-2009 just prior to the GFC identified around $17.6 billion in committed funds with 56% of this money coming from the superannuation funds. These were part of the federal government’s Innovation Investment Fund (IIF) and Innovation Investment Follow-on Fund (IIFF) rounds.

In 2012 the Australian Private Equity and Venture Capital Association Ltd reported that there is over $26 billion worth of VC and private equity (PE) investments in Australia. However, like their US counterparts the Australian VC industry has suffered equally hard times in recent years. Since 2007 investment performance has been poor and fund raising has become more difficult.

The GFC has had a significant impact on the availability of money for VC investments, and the superannuation funds are increasingly reluctant to take risks with their money. In recent years Australian VC funds managers were more likely to be reinvesting in their existing portfolio of businesses than looking for new ventures to invest into. For example, around 65% of the VC fund investments made in Australia in 2010 were follow-on funding.

Australia’s VC success stories were businesses such as Cochlear, SEEK, Resmed and Look Smart. However, in a similar pattern to the USA the Australian VC industry has found it increasingly difficult to identify new frontiers for growth. Most VC funding continues to go into ICT and biotech, although clean technologies have started to attract attention.

Future outlook for the VC industry

If the Kauffman Foundation is correct the VC industry is likely to shrink over coming years and return to what it always was, namely a valuable but very niche form of investment. They recommend a cleaning up of the VC industry in the US with the aim of essentially avoiding inefficient VC funds managers who have drawn too many excessive fees from their portfolios for little genuine return on these investments. As an investor Kauffman recommends moving away from VC funds towards the open stock market.

In Australia the key concern is how to find the money for VC funding. Superannuation funds and governments are increasingly unwilling to put up the capital. There is also competition for available funding from other sectors of the economy such as infrastructure. A shake out and downsizing of the Australian VC sector is highly likely in the current environment. Dragon’s Den may look exciting but it is far from the reality of entrepreneurship and VC investing.