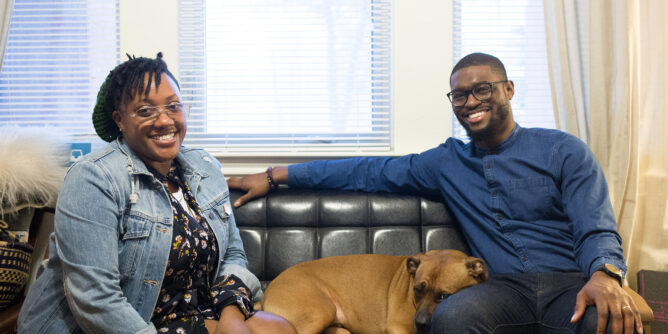 Christian Reed-Ogba and her husband, Uchennaya Ogba, are downtown people. They love the extravagant apartments, the socializing and the night life. In 2013, when they had a chance to move into the 1221 Broadway Lofts, the luxury apartments on the River Walk, near the Pearl, they jumped at the opportunity.

But they were different than many of the others around them. The couple was pinching pennies to make their modest income stretch to support their lifestyle and their fledgling public relations business. The 400-square-foot apartment with utilities was costing them $1,500 a month.

Almost three years later, the couple now finds themselves living at the Gardens at San Juan Square — a low-income, live-work apartment on the West Side — and they love it. The couple’s public relations business, BethanyEast PR and MGMT Consulting, has made $200,000 more in profit in the two years since the move than they did the three years prior, and they have used their time and money to help other small businesses grow with them.

“It was a rat race when we were paying all that money for rent,” Reed-Ogba said. “We were racing for so much money. We lost friends. We lost networking opportunities. We couldn’t socialize.”

Before the move, Reed-Ogba, a Detroit transplant who had been laid off by Blue Cross Blue Shield, and Ogba, a graduate of Trinity University, struggled to pay basic living expenses at 1221 Broadway. They were also trying to grow the startup that Reed-Ogba began in 2011, and they had to make calculated decisions about the limited money they could afford to put back into the business.

Through BethanyEast PR and MGMT Consulting, they were taking short-term contracts and only doing social media work. They made just enough money to have the material things they wanted — a fancy apartment, expensive furniture, two cars. There was no wiggle room to grow their business beyond grabbing fast-cash contracts.

Another hurdle: The couple felt there was no money out there to help black businesses — there were rumors in the black community that various lenders were racist. Though Reed-Ogba said this didn’t necessarily prove true in San Antonio, black-owned businesses statistically have a much harder time getting money for their company.

The couple decided to cut back.

“I had been bootstrapping my business for three years,” Reed-Ogba said. “I figured I could do it for at least another three.”

The couple sold one of their cars and downgraded the other. They began to cut their bills. They knew that meant giving up the downtown apartment they loved so much.

They moved to a cheaper complex in Alamo Heights, but the two-bedroom unit still cost $1,000 a month. The unit was disgusting and unlivable, they said. So they decided, in 2015, to move into a live-work unit at the Gardens at San Juan Square on Zarzamora Street — a low-income development run by the San Antonio Housing Authority.

Their current two-story, 980-square-foot unit costs about $725 a month, includes water, and comes with office space, customer parking and a conference room.

Reed-Ogba admits that she was hesitant to move to the West Side at first.

However, they have found the complex to be anything but that. They love the walkability, and they love their neighbors.

There are problems; a few times police officers have swarmed the parking lot or parts of the neighborhood. They still miss their downtown lifestyle, but they like the community and feel like they fit in. Reed-Ogba has gotten involved with helping the community. She has done a lot of work with community resources like BiblioTech and has been a mentor to the small business community.

“We show them how to register and how to respond when the bigger businesses hit you up — how to get ready and how to stay ready,” Reed-Ogba said. “We are trying to bring up the businesses that are coming behind us.”

From the outside, one might think the couple had a lot of money to have lived their previous lifestyle, or they took advantage of the low-income housing. In reality, they fell within the requirements to live at the complex, and these particular units were built to foster this kind of growth. It is not a permanent solution for the couple — now that they are on their feet, they will be moving out in January 2019. The move saved the couple upwards of $2,000 a month.

In the meantime, they have managed to help small and minority businesses with less know-how follow in their footsteps. Reed-Ogba estimates that they were able to award $150,000 in client contracts to local, small, or minority businesses in San Antonio in the last couple years.

“Sometimes, when folks do something like move into low-income housing, you want to hide it,” Reed-Ogba said. “When you have to sell your cars, you want to hide that. When you make the decision to sacrifice something, you don’t want folks to know that. Especially when you live in a town like San Antonio where everyone is so honest, so pure, so willing to help you.

“We didn’t want to look like we were hiding the fact that we moved to low-income housing or scaled back our lifestyle. What we wanted to do was help other businesses . . . by setting that goal, it changed it from just downsizing so we could scale up. It made it part of our story.”

Lattoia Massey, a black military veteran also known as Chef Nicola Blaque, said Reed-Obga brought her clients she would not have otherwise had access to.

“Being a female business owner herself, she always has advice to give,” Massey said. “She’s always there. Whenever I am going through a rough path I call her.”

In some ways, the couple sticks out in their part of the West Side. They are one of two black businesses on Zarzamora Street that Reed-Ogba knows of. In fact, only 3.9 percent of their neighborhood is black, according to the American Community Survey. They now run a successful business in one of the poorest ZIP codes in San Antonio — 78207, where the median income is less than $25,000 and where 40 percent of the community lives in poverty.

They don’t fit the stereotype most people imagine when considering people living in affordable housing. They are college educated, they frequent places like Local Coffee at the Pearl, and they weren’t forced into the complex by extreme poverty — they intentionally made the move. However, they would have never been able to scale their business and help others in the community without transitioning to the affordable housing complex.

“I used to know people who would say, ‘Oh no, I don’t go to the West Side,’’ Reed-Ogba said. “I would say, ‘Look at me I don’t have any bullet holes.’ I invite people to this side of town unapologetically.”