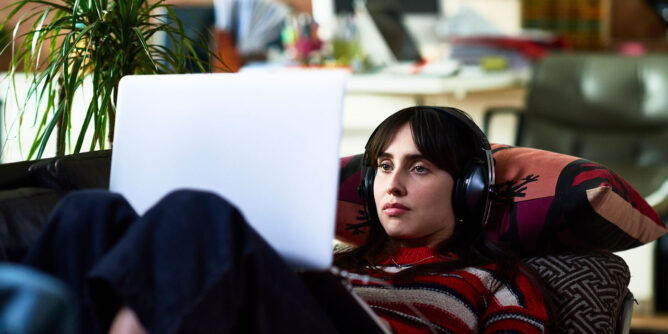 The issue: Most of us wouldn’t walk into a shop and pocket a DVD without paying for it. But research shows many have few qualms about stealing intangible items – downloading pirated copies of movies or music, for example. A 2016 paper in Social Neuroscience found less brain activity in an area typically associated with moral questions when people imagined illegally downloading copyrighted material than when they imagined stealing a physical object.

These days, streaming offers an alternative. Users subscribe to a service like Netflix and watch movies over the internet much as they would on YouTube, but with a higher resolution and no advertisements. Spotify, a music-streaming service, has two business models: a free option with advertisements between every few songs, like on the radio, and a subscription with a monthly fee of about $10.

Thanks to streaming, 2016 may become the second year in a row (since CD sales peaked in the late 1990s) when the music industry sees a bump in revenues, according to a September 2016 Bloomberg story: “U.S. streaming revenue grew 57 percent to $1.6 billion in the first half of 2016 and accounted for almost half of industry sales.” But despite the hopes of some artists and industry executives, new research suggests streaming is no panacea for piracy.

An academic study worth reading: “Streaming or Stealing? The Complementary Features Between Music Streaming and Music Piracy,” in the Journal of Retailing and Consumer Services, 2016.

Study summary: What makes people download pirated music? Karla Borja and Suzanne Dieringer, economists at the University of Tampa, surveyed 1,052 college students enrolled in introductory business classes at two Florida universities (one public and one private) in 2014 and 2015. Seventy-eight percent reported to have downloaded music illegally in the previous month.

With a 21-question survey, the researchers tested six factors that they had hypothesized increase the likelihood a student will download pirated music, including: low perceptions of risk, negative views of the music industry, peer pressure, familiarity with using the internet and demographic variables like income and gender.

There is little agreement on how to quantify the costs of piracy to the music or film industry. Some accuse industry entertainment executives of exaggerating the cost. This Wall Street Journal column and this Freakonomics blog explain.

The Recording Industry Association of America, a trade organization, publishes annual data on revenues from streaming, CD sales, and other music distribution platforms.

In 2016, digital revenues (streaming and purchased downloads) overtook sales of physical formats (CDs and records), according to the International Federation of the Phonographic Industry’s annual report. But the industry group argues that payments to artists and record labels are not keeping up with the “surging volume of consumption.”

The Digital Millennium Copyright Act (DMCA) is a 1998 law that, among other things, criminalizes the reproduction or distribution of copyrighted material — movies, music, software, etc. — over the internet against the copyright holder’s permission. It also places the burden on the copyright infringer, not the internet service provider. Penalties can include up to five years in jail and a $250,000 fine.

A 2013 paper in Information Economics and Policy found the ad-supported model of free streaming services “an effective policy for combating digital piracy.”

A 2014 paper in the Journal of Economic Behavior & Organization looks at the impact of a 2009 copyright protection reform in Sweden that immediately increased the risks of illegal file sharing. The reform “decreased internet traffic by 16 percent and increased music sales by 36 percent during the first six months.” But the effects largely disappeared after six months, “likely because of the weak enforcement of the law.”

This 2015 study in the International Journal of Research in Marketing examined revenues for free and paid music streaming services.

Journalist’s Resource has written about research that quantifies global transfers of copyrighted content using file sharing technology such as BitTorrent.