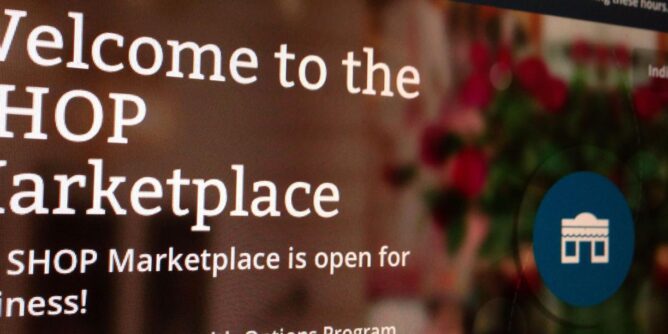 Millions of Americans have health insurance because of the Affordable Care Act, but there’s one area where enrollment has significantly dragged. Few small businesses are getting coverage through the law’s online insurance exchange.

Only 10,700 employers are currently enrolled in coverage through the Small Business Health Options Program, or SHOP, exchanges, the federal government announced this month. That figure represents about 85,000 Americans, the government said. Officials did not provide a state-by-state breakdown.

In contrast, more than 10 million Americans have signed up for health insurance through the exchanges created for individual consumers.

“While the enrollment numbers do not yet reflect the full potential of these marketplaces, we believe that SHOP is still an important option for small businesses looking for quality health coverage,” said John Arensmeyer, CEO of Small Business Majority, a major promoter of the small business exchanges.

The SHOP exchange is designed to allow employers with less than 50 full-time workers to compare competing plans. The company could then offer its employees a choice from among several policies. Businesses with fewer than 25 full-time workers can also qualify for a substantial tax credit if their employees enroll in SHOP plans.

But the exchanges have been mired by setbacks from the beginning.

Plans could be sold on the exchange starting in the fall of 2013 but only by paper application. Federal health officials delayed the launch of the website until last year in order to prioritize fixing HealthCare.gov, the individual exchange, after its disastrous launch in 2013.

When the SHOP website did finally launch last year, few employers knew about it.

“As with all new products, it will require time to educate businesses about all the features of SHOP Marketplaces,” the U.S. Department of Health and Human Services said in a written statement.

Other factors also are at play, especially in the St. Louis area.

For the two years that carriers could offer plans on the SHOP exchange, only one — Anthem BlueCross BlueShield — has elected to do so. That means local employers looking to use SHOP can only choose one carrier and one plan in each of the three “metal” levels that determine the quality of coverage.

Bill Hill, an insurance broker and president of the Missouri Association of Health Underwriters, said the lack of choice and difficulty in qualifying for the tax credit have doomed the exchange.

“Without that stuff, it is kind of hopeless,” he said.

The tax credit is generally only available to businesses with fewer than 25 full-time employees. Qualifying businesses must cover at least half of the cost of their employees’ insurance premiums and their average employee salary must be less than $50,000. The credit is worth 50 percent of the employer’s premium contribution.

Health and Human Services Secretary Sylvia Burwell listed changes to the tax credit for small businesses as a potential way to improve the health law during a conference call with reporters in June.

But even if employers qualify for the tax credit and want to enroll in SHOP coverage, they may not be able to. Most states, including Missouri, require 70 percent of workers to participate in their employer’s plan in order for it to be an option.

Despite the setbacks, federal officials are optimistic enrollment will improve. In addition to increasing awareness of the program, they point out more employers will be eligible to participate in SHOP during future enrollment cycles.

Starting in 2016, employers with fewer than 100 full-time workers will be considered “small businesses” under the law and thus qualify for SHOP. The expiration over the next few years of “grandfathered” insurance plans that are not compliant with the Affordable Care Act could also drive more businesses to use SHOP.