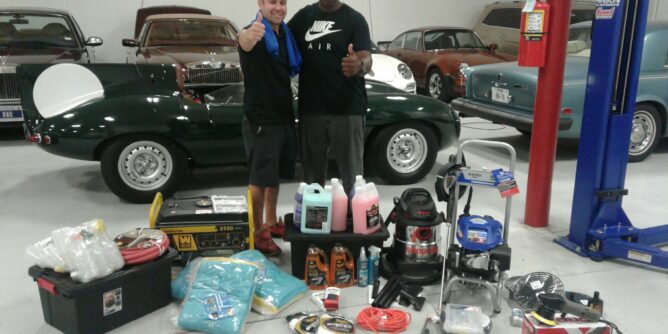 Back in 1989, life was set for Vincent Matthews. His talent as a shooting guard landed him a scholarship to the University of Wisconsin. Stout.

But after just one year, he was back at his mom’s house in San Antonio, his college career cut short by drugs and alcohol. He stayed in San Antonio’s basketball circle — he even had a cameo in a 1992 David Robinson Nike commercial — but binge drinking and crack cocaine were the dominant forces in his life.

That’s how things stayed for many years. By 2015, he was homeless, just another addict on the streets.

Finally, he he checked himself into Haven for Hope’s In House Recovery Program (IHRP), a 90-day substance abuse program. Then another, called Next Right Step, a 12-month program created by a group called Pay It Forward.

With well over a year of sobriety under his belt, Matthews was beginning to think about what might be next. Self-sufficiency is always the goal — but for some people, it seems impossible to reach.

Enter De Novo Foundation, a charitable organization that exists to remove blockers for people who want to provide for themselves — one person at a time.

Julie Dahlberg, executive director of Pay it Forward, first noticed that Matthews was probably capable to taking that extra step to self-sufficiency if he could get a little help.

“He was a real go-getter,” Dahlberg recalled. “We were cleaning up a vacant property, and Vincent had just been walking back to campus when he saw folks he knew in our program. He talked to them and wanted to help us out. He even took the lawnmower I was using from me.”

VAULT employee Johnny Wright and Matthews stand in front of the supplies Matthews received in May with the help of De Novo and VAULT Auto Services. COURTESY

Off and on since high school, Matthews had enjoyed detailing cars — cleaning them up and making them look new. He had been working a part-time job at Broadway Tire and Automotive, 3600 Broadway, for more than a year, but didn’t have the tools and resources necessary to turn his passion into a full-time business.

In March, Dahlberg introduced Matthews to Lee Richardson, De Novo’s executive director. He told her about the car detailing business he envisioned.

In April, Matthews left Haven for Hope i and moved into the Oxford House on Fredericksburg Road, a recovery house he shares with eight roommates.

Around the same time, Matthews opened his business, Anointed Hands Car Detailing. Thanks to his startup funds, he received all the supplies he had wished for: a pressure washer, an electric generator, a buffer, a Shop-Vac, cleaning chemicals and shop towels.

Matthews is still part of the team at Broadway Tire, and owner Kevin De La Garza allows him to use space in a garage behind the business for his detailing service.

“I knew he needed a shot,” De La Garza said. “The man he’s become is unbelievable. He always had a great heart, but just got mixed up with the wrong things. He’s a great person, and that’s why I put out and try to help him out as much as I can.”

De Novo was created in 2016, when its founder, Robert Ober, took the advice of a friend to expand his charitable endeavors into a nonprofit.

Until then, the endeavors were personal and ad-hoc. Ober recalled a time when he saw a couple at Whataburger counting change on a table and looking up at the menu. Ober walked up to them and gave them $20 and his business card.

“I told the man, ‘I don’t know what you do or what you’re doing, but have lunch on me and if you need anything else just call (my) number,’” Ober said.

Ober came from a middle-class home, but his success as an engineer and careful money management allowed him to share with those in need.

“Since I had lunch money to spare, I would share it,” Ober said. “If I had $10, and knew I could get by with $5, I would give the other half to someone who looked like they needed it.”

De Novo does what Ober has long done, but on a larger scale — fostering one-on-one relationships with persons in need.

“We take it on a need-by-need basis,” Ober said. “Because I’ve always (given to those in need), when I got a little more successful later in life, I did it more often, and the gifts were bigger. It went from a few hundred dollars to maybe a few thousand dollars.”

“For unto whomsoever much is given, of him shall much be required” — that’s the verse (Luke 12:48) that Ober says sums up his beliefs and De Novo’s credo.

With the help of De Novo and Haven for Hope, Matthews is almost two years sober.

He still goes to Haven for Hope to volunteer and stay involved with the community. “I’m not ever going to stop that, I’m just not,” he said.

“I can’t say enough great things about (De Novo),” Matthews said, fighting back years. “This is the organization that if you’re really trying to make a difference, if you really want to see people’s lives change, then De Novo is the place.

“I haven’t had one bill cancelled, I haven’t missed one meal, and I got a little money in the bank. It ain’t much, but it’s a start.”