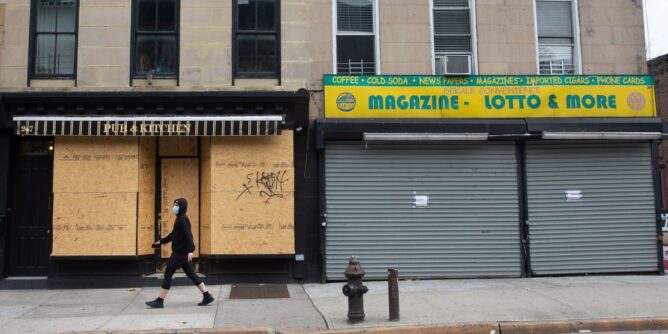 In Washington, a federal lending program for small businesses has run out of money, it was revealed Thursday. In New York City, the well appears to be dry, too — and businesses say they are getting the silent treatment.

In early March, Mayor Bill de Blasio announced his administration’s Small Business Services agency would roll out emergency aid. At first, grants of up to $6,000 were earmarked for businesses with fewer than five employees. That funding pool closed in the first week of April, sources said.

Then de Blasio announced a zero-interest loan pool of $20 million for businesses with under 100 workers whose revenues had tanked by 25% over 60 days. Each business would be eligible to borrow up to $75,000.

But workers contracted by the agency to process the loans told THE CITY that only about 600 applicants have qualified so far, and that the city abruptly halted applications less than two weeks after they opened.

It’s unlikely that many applicants will get help. Sources close to the process said the current funding would only cover 250 to 400 businesses, depending on the size of the loans.

“They got way out over their skis,” said one SBS-contracted loan processor. “They have like half a billion dollars worth of loan requests and $20 million to give out and I think they have no idea what comes next.”

Communication from the city about how the loans will work has been spotty at best, and absent at worst, say business owners and those who have tried to assist them.

The SBS website says “due to overwhelming interest,” the loan fund’s application intake has been paused. The site offers no information about the status of current applicants or how the money will be dispersed.

None of the people who spoke with THE CITY have received funding, or knew of businesses that had.

Le Gorju usually deals with industrial operations but has seen “every type” of business apply for the city loan in recent weeks — from Broadway producers to beer distributors. He is reaching out to elected officials to push for one thing: more money.

Money, though, may be scarce: On Thursday, the mayor said the city would have to cut $2.2 billion from its budget this year in the face of a projected $7.4 billion in lost tax revenue.

But from Le Gorju’s perspective, if you don’t increase the deficit now to save businesses, “you are cutting future income, taxes and jobs.”

“If you don’t have any more businesses, and they all close, then you have nothing left,” he said.

Among the businesses Gorju has tried to help apply for a city loan is Maurice Pastry, a fourth-generation dessert bakery that’s operated on East 135th Street and Locust Avenue in the South Bronx since 1946, according to Craig Brier, who runs the place with his parents and brother.

He and his family have not taken any pay since the outbreak as they try to support their employees who are “like our second family,” Brier told THE CITY by email.

Most of the company’s regular customers — offices, restaurants, hotels and gourmet shops — are all closed, he said. The business is still serving a limited number of clients and has applied for a contract to make boxed meals for the Department of Education.

While Brier waits on that, and to hear anything from SBS, he is “struggling, juggling and hoping.”

“The problem is there is no way to know when, if, nor how much we will be approved for,” he wrote. “I know they are busy, but a status check would be great.”

Gabriel Gorre runs a shipping company, CTS Logistics Group, with his father, Efrain, that’s been in business in Jamaica, Queens, for 26 years. They applied for a loan from the city as soon as they could, he said.

A huge chunk of their business has evaporated since air travel all but disappeared around the globe. So far, they’ve had to furlough one of their 13 workers.

Gorre hasn’t heard anything about his loan status since the first week of April — and all communication has come from a local business improvement group that helped with his application, or from the city’s lending partner, Pursuit Lending.

“From the city itself, we’ve heard absolutely nothing,” he said.

In the meantime, the Gorres have applied for loans through multiple federal programs and other grants through nonprofits and corporations. They received a $10,000 disbursement on Monday through the federal Economic Injury Disaster Loan program and are grateful, even though it’s a drop in the bucket.

“It could maybe cover a half of one payroll period,” Efrain Gorre said

The father-son team knows the worst is yet to come. In January and February, there was still “movement happening because the impact of the disease was limited to mostly China and then Italy,” Gabriel Gorre said. But now, shipping across the world has dipped.

“The biggest impact is starting to be felt,” he said. “We still have some work now — we’re not doing nothing — but it’s much more of a decline as compared to the first quarter.”

That economic halt is obvious where they do their work: a warehouse at JFK Airport that they share with two other shipping companies. Usually, it’s bustling, Efrain said. But on Wednesday, he stopped by and said he’s “never seen it so desolate” in the 18 years the company has operated in that spot.

“There were no cars, maybe one truck driving by,” he said. “It’s sad … it’s a combination of sad, weary, nervousness — all of those things. I try to stay calm, but it’s just a bad feeling.”

On March 20, nearly two weeks after announcing the small business loan program, the mayor said the city isn’t “going to be able to meet the full demand immediately.”

“We’ll do our best to reach as many as we can initially … about 400 businesses,” he added.

But even that estimate from the mayor was “never communicated” to the businesses, according to one staffer of a local economic development group.

A March 14 email obtained by THE CITY from SBS to businesses linked to a memo about the new program, but no mention was made about the limits of the loan fund.

On its website, SBS says its loans are available “on a first-come-first-served basis.”

“It was never positioned as a lottery — like, ‘Fill this out, you might get lucky enough to get a loan,’” said one business services professional who has been advising applicants. “People applied for this thinking, ‘I have applied for a loan that they told me I was going to get in a few weeks.’ So businesses made actual business decisions based on that.”

In the same March 20 briefing, the mayor also promised applications for the loans would open up the following day — they did not open until March 27, emails from loan processors show — and that “the loan money will be in their bank accounts by the end of this coming week.”

Samantha Keitt, an SBS spokesperson, said that both the city’s grant and loan programs were “always intended as a bridge as we waited for federal support.”

“The overwhelming needs of New York City’s small business community can only be met by the resources of the federal government,” she said in a statement.