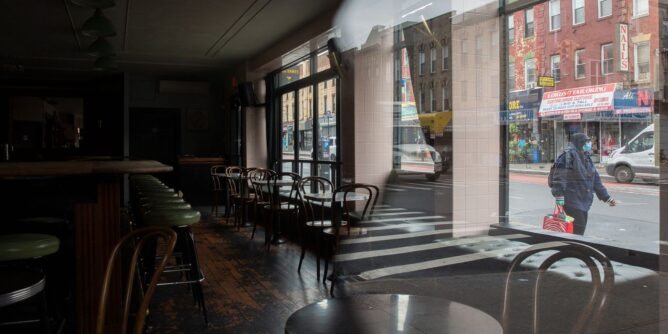 Only 100 of the small businesses that applied for emergency loans have received any money so far, officials said Monday as City Hall bolstered a separate grants program to shore up failing mom-and-pops.

Some applicants told THE CITY last week that they heard nothing from Mayor Bill de Blasio’s Small Business Services (SBS) agency after putting in for the coronavirus loans, hoping to tap into a $20 million pool.

During a news conference Monday, the mayor told THE CITY he wants to hear from anyone who had issues with the process.

“If you know of folks who had a particular problem, we want to follow up with that and see if it’s someone that … we still can reach with this effort,” he said.

But the only part changed is the grant program, whose pot increases from $10 million to $30 million. That program gives cash to businesses with fewer than five employees.

The $20 million zero-interest loan pool for outfits with under 100 employees remains unchanged. By last week, SBS had heard from 15,000 businesses interested in the loan and received 8,500 applications before the agency stopped taking them in early April.

The loan through the Small Business Continuity Fund would give up to $75,000 to businesses that could prove they had lost at least 25% of their revenue within 60 days.

The city has disbursed 1,857 cash grants, totaling $14 million, a mayoral spokesperson said. But only 100 loans totalling $5.9 million had been “distributed” as of Monday.

In an April 7 response to the mayor’s preliminary fiscal 2021 budget, the City Council said the eligibility of the loan program should be “broadened to reach more business” — and called on de Blasio to raise the loan ceiling to $250,000.

“It is imperative to expedite the processing of these loans to get money out as quickly as possible to help prevent permanent closures and save jobs,” the budget response says.

Megan Kinney could use the money. She’s waiting on three loan applications for her businesses. Kinney, a designer, runs a garment manufacturing company that serves her five clothing shops in Manhattan and Brooklyn.

She received two city grants that allowed her to keep some employees on the payroll. Now, she’s had to lay off all but four of her 15 workers.

“There’s no guarantee of money. And there’s not enough money to keep people on payroll, let alone work, to wait around to retain them,” she said. “And there’s no end.”

She and her husband have also applied to federal loan programs, but haven’t yet received help, they said.

De Blasio has repeatedly pointed to funding from the federal government as the solution for New York’s struggling small businesses.

Julia Arredondo, a mayoral spokesperson, said the funding increase announced Monday “was meant to help us reach as many small businesses as possible, while we waited for the federal loan program to open up, which we are now encouraging New York City small businesses to apply for.”

“We don’t have the capacity to help every single small business in need, because there is so much need right now, but we are thankful to Senator [Charles] Schumer and Speaker [Nancy] Pelosi for fighting for additional funding in the federal program,” she added.

Joseph Merante is still waiting to hear about the fate of his city loan application. He is the executive director at the Humpty Dumpty Institute, a small Manhattan-based nonprofit whose mission is to solve humanitarian issues through partnerships with the United Nations, Congress and colleges and universities.

The group supports itself and its three employees through fees gathered for hosting and planning educational travel overseas. But now, because of global travel restrictions, all of that has changed.

“We can’t do our programs and, therefore, we have absolutely no income,” he said.

The group did receive some money from the city’s grant program, which will cover 35% of its payroll costs for eight weeks, he said. But as for the loan program, it’s anyone’s guess, Merante said.

On April 17, after THE CITY’s story ran, SBS emailed Metante saying it was pausing applications “due to the overwhelming response.”

“If we don’t get this loan, we’ll probably have to furlough everyone,” he said. “Hopefully we can regroup later on, which is going to be very difficult.”

The article was published at Flooded With Requests, City Boosts Small Business Grant Fund — But Not Loan Pool