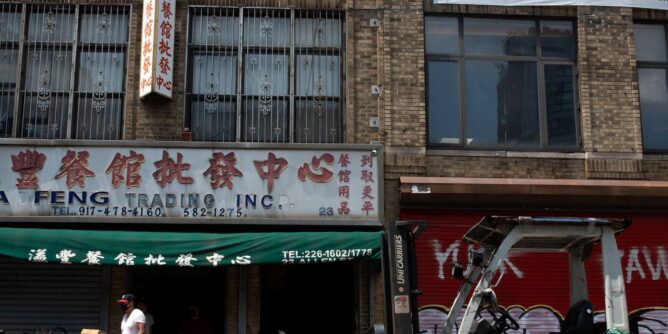 Federal funds for COVID-19 business relief were depleted at one point, but now there’s more money than businesses getting it.

According to the U.S. Small Business Administration, $128 billion was left to lend in the Paycheck Protection Program as of Wednesday evening, with just over a week left for businesses to apply in the current round. Applications are due Saturday, Aug. 8.

But in New York, it’s been a struggle to connect that pot of federal dollars to some of those who need funding most.

In the South Bronx, a local business liaison said he went in-person to talk up the program to mostly Spanish-speaking auto repair owners who hadn’t yet applied.

In Manhattan, staff from the borough’s Chamber of Commerce are going door-to-door to spread the word, particularly uptown and on the Lower East Side.

In North Brooklyn, loan processors have struggled to reach manufacturers who may not speak English, or aren’t digitally adept.

‘Tip of the Iceberg’

“All the savvy, larger businesses got in and got theirs,” said Leah Archibald, executive director of East Williamsburg-based Evergreen Exchange, which helps small businesses in the area’s industrial zone. “I feel like we are missing a lot of minority and immigrant-owned businesses.”

Archibald’s group maintains a list of about 1,500 businesses through an annual door-to-door survey kept “as up-to-date as humanly possible,” she said. But still, there are those her team misses.

In mid-May, Archibald noted, a Spanish-speaking colleague was delivering meals to homebound locals when he ran into the owner of a woodworking shop two blocks from their offices.

The woodworker, who speaks only Spanish, had tried to apply for PPP in person at his bank, where he was told to fill out the application online. He never finished the paperwork.

Because of the happenstance run-in, Archibald was able to connect him with a community development financing institution fluent in Spanish to shepherd him through the process.

The woodworker got the help he needed, but the chance encounter made Archibald realize “there are so many people falling through the cracks,” she said.

“When you see the tip of the iceberg, you know the majority of the volume is hidden,” Archibald added.

Minority and women-owned businesses have struggled to secure PPP funding all over the country, as advocates have pointed out for months. With this round’s deadline rapidly approaching, concern is growing that the situation isn’t getting much better.

She said many of her group’s clients get rejected for various federal loans: Some because of their credit scores — which is required by applicants to the SBA’s Economic Injury Disaster Loan program, but not to PPP — or because they don’t have the necessary paperwork lined up.

“A lot of these businesses, when they started — as mom and pops, or they’re street vendors, or they’re selling at home — they’re not thinking through documentation and how I should be filing my taxes,” she said.

“You have to show everything that you have,” said Lalita Kumut, owner of The Fragrance Shop in the East Village. “They’re asking for your income tax. They’re asking for anything from your accountant. You cannot ignore it.”

Kumut applied for PPP back in April and has not yet seen the money come through, she said. She joined a coalition of business owners at a news conference Wednesday urging the state to implement rent relief for small businesses.

The Paycheck Protection Program is not for everyone, and should be used only by proprietors who intend to follow the rules, including spending 60% of the money on payroll, and keeping workers employed for 24 weeks, Archibald said.

“It’s not free money. You really actually have to do this stuff,” she said. “You have to sign a statement saying this is my intention to do this.”

Jessica Walker, president of the Manhattan Chamber of Commerce, underscored that PPP is “not the cure-all for all businesses,” particularly because the loan can only go so far to cover businesses’ biggest burden: rent.

“Rent is a huge cost for most businesses and the PPP is designed to primarily help you pay for your employees, your labor costs, and cover only a portion of rent,” she said. “That helps a lot of businesses, but it’s not necessarily right for every business.”

Still, Walker said, the Chamber is making efforts to reach businesses before the deadline, leading webinars and workshops, and reaching out to owners by phone and in person, particularly in Harlem, Washington Heights, Inwood and the Lower East Side.

“Now that we know that there were winners and losers — and particularly … that minority business owners did not do as well, which is very concerning — we have done tremendous outreach to try to reverse that,” she said.

Christophe Le Gorju, senior director at the South Bronx Overall Economic Development Corporation, is trying to push more businesses in his borough to apply, but finds it’s an uphill battle.

To spread the word, he visited shops along Jerome Avenue’s auto repair row where many workers speak only Spanish and often are independent contractors. Some thought — erroneously — because they have work visas, they couldn’t apply, and others who stopped working only briefly weren’t sure they were eligible.

“They thought they didn’t qualify because they barely closed,” he said. “It’s not about closing the business. It’s about loss of income.”

The article was published at Feds’ Small Business Loan Program Has $128B Left. Yet City’s Minority Owners Still Struggling to Get Their Share