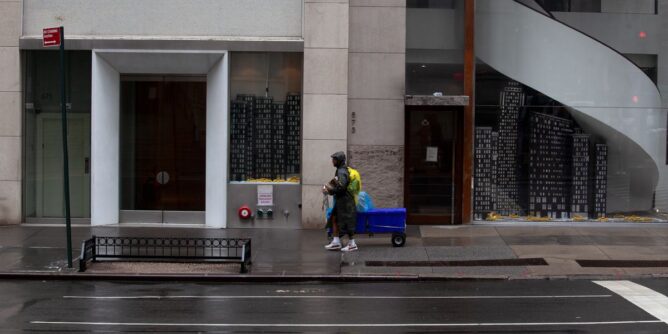 Hotels in New York City limp along with 40% occupancy.

Only about 8% of companies have brought their workers back to their offices, leaving business districts moribund.

Some restaurants stay alive with outdoor dining, but the city is now the only place in the Northeast where indoor dining remains prohibited.

The city coronavirus infection rate among those tested remains below 1% — a product, government officials say, of the careful phasing in of a return to public life that extends to Tuesday’s decision to delay in-person classes at public schools.

But business groups, from hotels to restaurants to owners of the city’s massive office towers, are pressuring Mayor Bill de Blasio’s administration to move faster on reopening parts of the economy still hamstrung by pandemic restrictions. They argue the rules present insurmountable hurdles to the recovery of the city’s economy.

“With indoor dining set to resume in New Jersey, New York City is now surrounded by indoor dining while being locked out from participating at significant economic peril,” said Andrew Rigie, executive director of the New York Hospitality Alliance. “The situation is at a boiling point and our government leaders must provide a plan and start opening indoor dining in the five boroughs, just like they have throughout the rest of the state.”

New York lost 914,000 jobs in April as the shutdown rippled across the economy, or about 20% of all the record-high 4.7 million jobs that existed in February.

Despite gains during the last three months, employment in the city remains 702,000 jobs below the February mark. While the national unemployment rate in July fell to 10.2%, New York’s barely budged, coming in at 19.8%, near Great Depression levels.

Hotels, meanwhile, saw their summer and fall marketing plans derailed by fears of New York officials about visitors from other states. Some 30 states, Puerto Rico, Guam and the Virgin Islands are currently on Gov. Andrew Cuomo’s quarantine list.

“Hotels were starting to gear up for staycations from people in nearby states, but that is effectively dead due to the quarantine requirement imposed by the governor,” said Vijay Dandapani, CEO of the Hotel Association of New York. “The mayor’s latest move to compel hotels to ‘police’ the initiative to collect state of origin data is a further deterrent.”

John Fitzpatrick closed his Fitzpatrick Manhattan hotel on Lexington Avenue at 57th Street when the statewide shutdowns began. He kept open his Fitzpatrick Grand Central because it had a few airline crews staying, but never filled more than 25 rooms.

“We started to get a few rooms back in,” he said. “What really killed us was closing New York to other states. We can’t even do domestic business.”

Overall occupancy rates in city hotels in the last three weeks have been at about 40%, with rooms going at an average of $130 a night, according to STR, which tracks the hospitality industry — figures that suggest the hotels are gushing red ink.

For the same period last year, occupancy was about 90% and the average room rate $225 a night.

Landlords like Jeff Blau, CEO of Related, the owner of Hudson Yards, have taken to trying to lure their tenants to bring employees back to empty office buildings as white- collar workers toil from home — in the city or beyond.

Blau told Bloomberg News recently that he was personally calling the CEOs whose companies rented space in his buildings, pleading with them to reopen offices.

“Business leaders face a stark choice,” he wrote in a Wall Street Journal op-ed published last month. “We can allow the economy to continue to decay or we can revive New York by bringing employees back to our offices.”

Related reopened its offices on June 22 with the start of Phase 2. The British government of Boris Johnson launched a campaign this week to pressure firms there to restaff their offices in London, New York’s primary rival as a financial center.

What’s missing, some business leaders say, is help from the mayor and other officials. James Whelan, president of the Real Estate Board of New York, contrasted the bustle in areas like Greenwich Village and the Upper East Side with the quiet of Midtown.

“Our government leaders have done a good job of educating when they issued the stay-at-home orders and, more recently, the constant refrains about wearing masks and social distancing,” he said. “What is needed is educating the public that with the safety protocols in place it is safe to come back to work.”

When asked about the administration’s effort, Mitch Schwartz, a mayoral spokesperson, said it was up to companies to make their own decisions about their employees. Insiders also said that when schools do reopen later in September, the administration expects more workers to return.

But restaurant owners are tired of waiting for the return of office workers and other customers.

The Hospitality Alliance recently threatened to sue the city to force indoor dining. Separately, some 330 restaurants joined a suit, with the lead plaintiff, Queens restaurant Il Bacco, demanding $2 billion in damages because of the indoor dining ban.

The city, pointing to COVID-19 spikes elsewhere, contends indoor dining remains likely to spark a resurgence of the virus.

“When you look at the data really from across the world, there is no doubt, one very common setting in which infections occur — and not just individual infections, but what we call super-spreading events and those are settings where there was indoor dining and drinking,” Dr. Jay Varma, a senior advisor to the mayor, said during a recent press briefing.

“We are in a great spot in the city right now, but the trouble is we are connected to people everywhere else,” said Troy Tassier, an economist at Fordham specializing in epidemiology. He calls the decision on indoor dining “a close call.”

Interviewed last week, Tassier said that government officials were probably delaying decisions on restaurants and other still restricted areas of the economy until they saw whether the reopening of school buildings sparked a new COVID-19 wave.

With the delay in the return of in-person classes, that benchmark has now been pushed back as well.