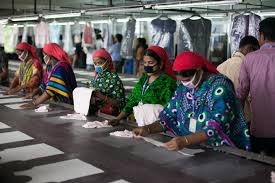 KIGALI, RWANDA – While pundits are busy predicting the consequences of President Donald Trump’s escalating trade war with China, the U.S. is embroiled in another trade dispute in East Africa – over Rwanda’s clothing industry.

The trade dispute began in 2015, when Rwanda, Tanzania, Uganda, Kenya and Burundi announced that in support of their domestic textile industries, they would phase out secondhand clothing imports from western countries by imposing a tax so high, it would effectively act as a ban.

The global trade in used clothing is a multibillion-dollar business, and the U.S. is one of the world’s top exporters. In 2016, East Africa imported $274 million worth of secondhand clothes and shoes, mostly from the U.S. and Europe. The buying and selling of used clothes fuels an informal industry that provides a living for merchants across the region.

But local designers and manufacturers have trouble competing with low-cost secondhand fashion. Rwanda says keeping out used clothes will not only help protect its own garment industry, but also preserve the dignity of Rwandans by discouraging them from wearing hand-me-downs from the West.

The U.S., worried that the decision would cost thousands of jobs in its used clothing industry, threatened to remove participating countries from the African Growth and Opportunity Act (AGOA), which allows duty-free access to the U.S. market for more than 6,500 products. Kenya, Tanzania and Uganda agreed not to go ahead with the tax, but Rwanda followed through and even hiked tax rates on secondhand clothes earlier this year. As a result, President Trump suspended Rwanda’s access to AGOA.

Rwanda won’t suffer much from having its duty-free access to the U.S. cut off, says Olivia Zank, an Overseas Development Institute fellow who worked in the Rwandan Ministry of Trade and Industry until December 2017. Only about 1 percent of the country’s exports to the U.S. are AGOA-eligible, “equal to $435,000 in 2015,” she says.

But the fight against secondhand clothes could have a dramatic impact, both positive and negative, on Rwanda’s garment industry and the women who make up the majority of its workforce.

Delphine Uwamahoro, creative director of Delphine Fashion House in Kigali, says the used clothing tax has already helped boost her business. With the drop in cheap, mostly low-quality clothing coming into Rwanda, her sales have increased. “This movement brought attention to made-in-Rwanda clothes and people started giving them more value,” she says. “The ignorance towards firsthand clothes made in Rwanda has started changing.”

The tax is meant to have a similar impact across Rwanda’s clothing industry, creating more opportunity and income for the country’s designers, brands and garment factories. But for the women working on the factory floor, it could have the opposite effect.

If Rwanda’s secondhand clothing market disappears, men who usually make a living selling those clothes will have to find new employment. And they could end up taking garment factory jobs that would otherwise go to women, says Hanna Wetters, an Africa fellow for the Washington, D.C.-based networking organization Young Professionals in Foreign Policy.

“Building up Rwanda’s domestic textile industry may create more opportunities for women to participate in the supply chain in cloth and garment production,” she says. “However, even though these are traditionally women-dominated industries, women may be edged out by men in search of work.”

And there are already fewer jobs to compete for. In June, the garment company C&H laid off workers from its two factories in Kigali, which are among only a handful of garment factories in the whole country.

Coster Ingabire, 21, was one of those recently fired from her job at C&H, where women make up 65 percent of the employees. “They started sending people off, asking them to take a forced leave with a promise that they would be called back,” she says. “We feel so bad, of course, because we lost a source of income.”

Ingabire, who had been working in the embroidery room, had only been at the job three months before she was told to leave. “Although in the factory it was too much work, being unemployed is not fun.” A month after she was fired, she is still looking for a new job.

“Many of the people I know ended up in jobs where they are mistreated or became prostitutes. I don’t want to see myself there.”

General manager Malou Jontilano says that C&H, which is majority-owned and operated by women, has “not been affected whatsoever” by the trade spat between Rwanda and the U.S. She says the latest round of layoffs was due to the seasonal nature of the industry.

“Some seasons, we have too many orders, and we will be compelled to employ many workers, and when it is in low season we suspend some until further notice,” she says.

“Nobody was fired from here because of the AGOA removal of duty-free [access].”

The tax currently straining relations between Rwanda and the U.S. is supposed to wean Rwandans off their reliance on secondhand clothes and boost the domestic clothing sector – policymakers hope the phase-out will eventually lead to the creation of 25,655 jobs a year.

But for now, whether due to the trade dispute or unpredictable customer demand, women are struggling to find stable work in Rwanda’s nascent garment industry.

As the government waits to see if its Rwanda First stance will pay off, the women making the country’s clothes could be suffering the consequences.

This article was originally published on As U.S. and Rwanda Battle Over Used Clothes, Garment Workers Lose Out